You are here: Home / Sports / Bucks beat the Heat 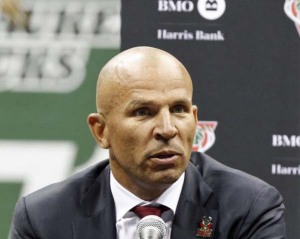 Kendall Marshall poured in 20 points to lead six Bucks in double figures in Milwaukee‘s 109-85 win over the Miami Heat at the BMO Harris Bradley Center on Friday night.

Marshall hit 7 of his 8 shots from the field, including 4 of 5 three-pointers.  Marshall’s play was needed and welcomed when starter Brandon Knight got into foul trouble.

Dwyane Wade had 28 points to lead all scorers for Miami.  Chris Bosh added 21.

The Bucks trailed 69-67 in the third quarter when Jabari Parker found teammate Giannis Antetokounmpo with a pass that led to a thundering dunk that brought the 16,325 to their feet.  Antetokounmpo was fouled on the play and he converted the three-point play.  From there, the Bucks went on a 21-3 run to pull away.

AUDIO: Jason Kidd says the Bucks defense got better as the game went on :16

The Bucks turned it over 25 times, but they out-rebounded the Heat 45-20.  Miami’s 20 rebounds were the fewest grabbed by an NBA team in a game this season.  It was also the lowest total by a Bucks opponent ever.

The Bucks are off today.  They’ll hit the road to face the Mavericks in Dallas on Sunday.