You are here: Home / Sports / Bucks Parker is Eastern Conference Rookie of the Month 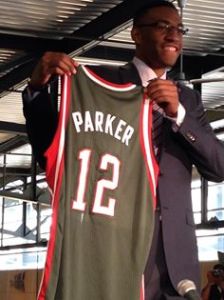 The NBA has named Milwaukee Bucks forward Jabari Parker the Eastern Conference Rookie of the Month for games played in October/November.  The honor is the first of Parker’s career and the first by a Bucks player since the 2009-10 season.

Parker averaged 11.9 points and 6.1 rebounds in helping the Bucks to a 10-8 record.  The Duke alum scored in double figures 12 times during the month, including a career-best 23 points at Brooklyn on Nov. 19 that stands as the highest-scoring game by a Bucks teenager in franchise history.

Parker becomes the seventh player in Bucks franchise history to be named Rookie of the Month.