You are here: Home / Sports / Bucks win at the buzzer, Parker injured 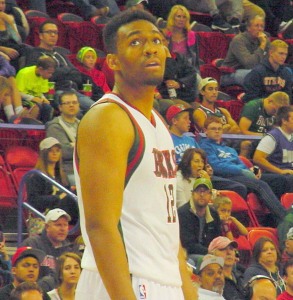 Khris Middleton hit a last second game-winning three-pointer to send the Milwaukee Bucks to a 96-94 win over the Phoenix Suns in the opener of a four-game Western road swing Monday night.  It’s the first game winner of Middleton’s career.

But the victory was overshadowed by the 3rd quarter loss of the teams second overall draft pick Jabari Parker.  He had to be carried off by teammates after injuring his left knee on a drive to the basket.  The Bucks are calling it a knee sprain and say Parker will undergo more tests today.

The Bucks (13-12) improved to 5-4 against teams from the Western Conference.  They got 20 points from point guard Brandon Knight, 14 from Middleton and 13 from Zaza Pachulia.

Jared Dudley had 11 points, four assists and four rebounds in 31 minutes of playing time against his former Suns team.

The Bucks trailed 53-44 at the half but rallied after Parker went down in the third quarter.  They outscored the Suns 29-22 in the fourth quarter to pull out the win.