You are here: Home / News / Defense has a big day in Packers in playoff clinching victory 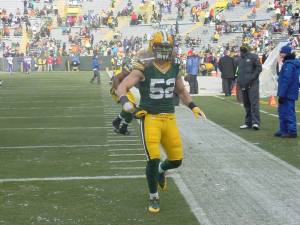 The Green Bay Packers defense dominated Tampa Bay on Sunday, holding the Buccaneers in check in a 20-3 victory at Raymond James Stadium.  The victory clinched a playoff spot for the Packers for the sixth straight season.

The Bucs entered the game with just two victories and one of the worst offenses in the NFL and it showed.

Julius Peppers had a two sack day and Clay Matthews got credit for 2 1/2, giving him ten sacks for the season.  Matthews has 7.5 sacks in the last seven games, since he started playing on the inside.

The Packers defense won’t see another offense like the one they saw today, so we’ll get a real indication soon just where their defense stands moving forward.

Offensively, Aaron Rodgers entered the game having battled the flu for the last couple of days.  Then he suffered a pulled left calf muscle early in the Packers victory.  Rodgers still passed for 318 yards and a touchdown, but he was limping after the game.  We’ll see what that means for the Packers game against Detroit this Sunday.

The Packers (11-4) will face the Lions (11-4) at Lambeau Field this Sunday.  The game has been flexed from a noon start to 3:25pm for the NFC North Division title and a first round bye in the playoffs.

Rodgers made it clear after the game that there’s almost no scenario he could think of that would keep him out of the Lions game.

AUDIO: Aaron Rodgers on his status for the Lions game :06

AUDIO: Mike McCarthy said it was a great effort by his Quarterback :18

Backup quarterback Matt Flynn began warming up on the sideline but didn’t enter the game until late in the fourth quarter in mop-up duty.  To help Rodgers , the training staff put an insert in his left shoe to help take some of the pressure off the calf.  It helped, but Rodgers said it tightened up by halftime and he had limited mobility.

The issue for Rodgers was not his passing.  He completed 31 of 40 passes for the game.  But the calf injury did hurt his ability to get out and scramble.

Mike McCarthy adjusted his play calling to keep Rodgers in the pocket and allow him to get rid of the ball quicker.

Randall Cobb had 11 receptions for 131 yards and Jordy Nelson had 9 catches for 113 yards and a touchdown.