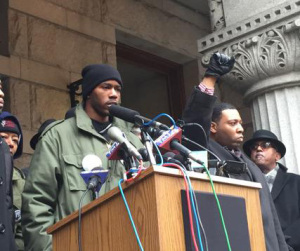 Just hours after the announcement came down Monday that the Milwaukee County district attorney had determined that former Milwaukee officer Christopher Manney was justified in using deadly force during an altercation with Dontre Hamilton in April, the family of the slain man and their supporters addressed a crowd in front of Milwaukee’s Federal Courthouse.

Nate Hamilton, Dontre’s brother, told the crowd that the community needs justice, claiming that “we’re not gonna be…laid back and stay sheltered from justice. We deserve justice. Justice is our right.”

Dozens of protesters filled the streets following the announcement, marching from the site in Red Arrow Park where Hamilton was killed. While the family called for demonstrators to remain peaceful in opposing the decision, Nate Hamilton also urged people to unite and take their community back. “We need to protect each other. We need to stop the violence in our communities so we can get rid of these pigs that kill us.”

An attorney representing the Hamilton family also announced that they are seeking a federal investigation of the shooting. Attorney Jonathan Safran said he has “been in contact with the United States Attorney’s Office for the Eastern District of Wisconsin, in Milwaukee, and we have formally requested that they communicate with the United States Department of Justice, Civil Rights Division, Criminal Section, to immediately commence a federal investigation into this matter, with the belief that Federal law criminal civil rights charges are warranted in this case.”

WUWM radio contributed to this report.