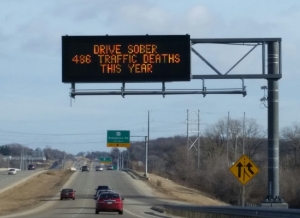 If you drive in Wisconsin, you can’t help but notice the attention-grabbing signs on major highways — the ones showing us there were 488 deaths on the roads this year, as of Monday.

Those large, electronic message signs illuminated with LEDs display useful information in all corners of the state. David Pabst is director of the Bureau of Transportation Safety at the Wisconsin Department of Transportation. He says those Dynamic Message Signs have many uses — Amber alerts, warnings of construction, delays, and other safety messages. And Pabst says, “Certainly we try to let people know that people are still getting killed on the road.”

With just a couple days remaining in the year, Wisconsin will likely finish 2014 with fewer than 500 traffic fatalities. That hasn’t happened in decades, and it would be the lowest number of traffic deaths since 1943. While it’s still too many, Pabst says not too long ago that number was twice as high. “In the 1990s and in the ’70s we were at times over 1,000 deaths in a year. And now we’re getting to the point where we’re at half that.” He hopes that within our lifetimes, we’ll see that go down to zero.

The lowest number of road fatalities on record — 417 — was during World War II. Speed limits were lower, men were overseas, there was a tire shortage and gas rationing. Despite a lot more people on the roads, Pabst says motorists are getting smarter, cars and highways are safer. Also, he says, deaths and injuries can be avoided when drivers buckle up, slow down, and drive sober.