You are here: Home / News / Five Packers selected to the Pro Bowl 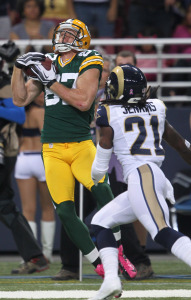 The Green Bay Packers had five of its players named to the Pro Bowl today.  Seven more players were additionally named alternates.

John Kuhn was selected to his second career Pro Bowl (2011).  Kuhn has appeared in every game for the Packers this season.  It’s the eighth consecutive seasons he has played in at least 14 games.

Clay Matthews earned the fifth selection to the Pro Bowl in his six-year career.  He passes Bill Forester (1959-62) for the most selections for a Packers’ linebacker.  Matthews leads the Packers with 10 sacks this season.  It is his fourth season with 10-plus sacks, which is tied with Reggie White and Kabeer Gbaja-Biamila for No. 1 in team history.

Jordy Nelson is making his first trip to the Pro Bowl.  He ranks in the top five in the NFL in receiving yards and touchdown receptions (13) this season.  His 1,433 receiving yards are the third most by a Packer in a single season.  Nelson also became the fourth player in franchise history to reach 90 receptions in the regular season (92).

Aaron Rodgers earned his fourth Pro Bowl selection (2009, 2011, 2012).  He joins Bart Starr and Cecil Isbell for the second-most selections by a Green Bay quarterback, trailing Brett Favre’s nine.  Rodgers ranks second in the NFL this season in passer rating (111.0) and touchdown percentage (7.2), is No. 1 in interception percentage (1.0) and No. 3 in touchdown passes (36).

Josh Sitton earned his second career Pro Bowl honor (2012), but his first as an original selection.  He is part of an offensive line that has only given up 29 sacks on the season, the fewest by a Green Bay offensive line since 2007 (19).