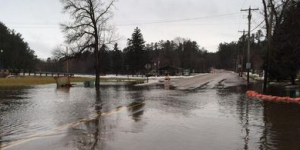 A main road through the Menominee Indian Reservation is closed because of flooding on the Wolf River.

The state Department of Transportation on Tuesday closed Highway 47-55 on the north side of Keshena. DOT maintenance supervisor Brent Matthews says the decision was made after the water became deep enough to conceal the edge lines on the road.

The flooding is the result of ice dams on the Wolf River, which have caused water to back up and cover the highway. With temperatures expected to drop, there are also concerns that ice could form over the road.

Crews have been working to clear the ice jam, but Matthews says it remains uncertain how long the road will remain closed.