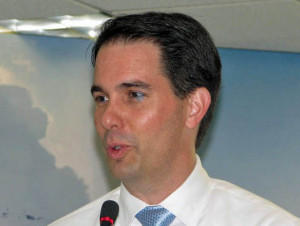 The governor says any debate over making Wisconsin a right-to-work state would be a distraction at the Capitol, although that’s not stopping fellow Republicans from saying they plan to introduce a bill early on next year. Walker is asking lawmakers to drop the issue though, telling reporters at the Capitol Friday that “I’ve asked them publicly and privately not to pursue that…because I think it would distract from our ability to take on the other reforms we’ve talked about.”

The governor, who sponsored a right-to-work bill in the 90s, says his stance on the issue has not changed. However, he says it’s premature to comment on whether he would sign legislation if it makes it to his desk. Democrats have asked the governor to threaten to veto a bill to end the debate, but Walker says that’s not something he’s willing to consider.