You are here: Home / Fires/Accidents/Disasters / It’s the worst time of year for house fires 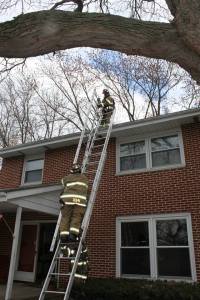 The holiday season is the most dangerous time of year for house fires.  And despite what you might think, it’s not because of those Christmas lights and candles.

Barbara Behling of the American Red Cross of Northeast Wisconsin says kitchen mishaps are top cause of holiday fires.  She says we’re not necessarily bad cooks — but we do tend to leave an oven on by mistake, or get pot-holders to close to the heat.  Behling says people have also been known to knock kettles over.  She says heating mistakes also generate more fires this time of year — things like using ovens as heaters, or misusing space heaters.

Behling says newer homes tend to burn faster than older ones.  That’s because the traditional lumber and construction techniques of older homes don’t burn as quickly as the glue-and-chemicals often found in newer structures.

The Red Cross is trying to reduce fire deaths by 25 percent over a five-year period, by working with partners to get more of us to have working smoke alarms. Behling said the program started in Stevens Point — which she calls a “lovely small town” with a “higher-than-average incidence of dangerous fires.”