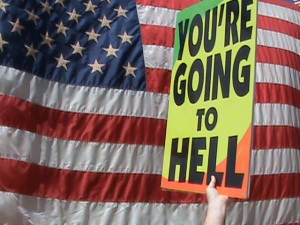 Racine Deputy City Attorney Scott Letteney says there was e-mail contact with the group’s attorney about what’s allowed for protests and demonstrations — the same for any group under similar circumstnces. “The Westboro Baptist Church contacted the police department to let them know they were coming. I simply communicated by email with the church’s attorney to make sure they are aware of the particular City of Racine ordinances that relate to this coming gathering and this sort of activity.” Letteney told them as long as they follow the rules there would be no problem. “I haven’t heard back from them.”

Saint Lucy’s Church, on Racine’s southwest side, is attended by Alderman Greg Helding. “One of the nuns who taught me when I was at St. Catherines, when I would complain or whine about somebody saying bad things would say ‘just consider the source.’ So,” he says, “considering the source, I have no idea why they are coming nor do I really care.”

Racine Mayor John Dickert can’t figure out why they do this, and especially now. “I just find it unfortunate that a group is coming in at one of the most blessed times of the year and talking about hate. I don’t think that there’s any room for it.” Dickert adds, “The best thing to do is just ignore it and probably pray for them. I don’t think there’s any place for hate in the world right now. There’s far too much of it. I just hope that they find it in there hearts not to do that.”

Racine Police Sergeant Jessie Metoyer says officers will be at each event to ensure order, including with any counter-protesters. The same holds true in Kenosha, while school district officials in both communities are coordinating with police on the situation.