You are here: Home / Packers / Matthews rolls despite changes on defense 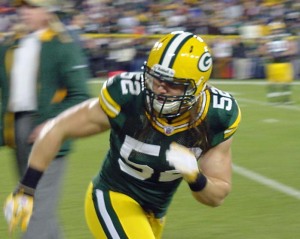 Earlier this season, the Green Bay Packers were getting run over by opposing running games.  The Packers needed to make a change, so they moved Clay Matthews to middle linebacker in nickel defensive formations and its made a major impact.

The Packers moved from last in the NFL against the run at the bye week to 22nd.  Clay Matthews is a big reason why!

Matthews currently has 58 tackles, two off of his season high.  He had 2 1/2 sacks against Tampa Bay on Sunday to give him ten for the season and 60 in his career, adding to his eight pass breakups, one interception and two forced fumbles.

There’s been some speculation that Matthews may be disappointed at not being voted one of six team captains by his peers.  But Mike McCarthy said he doesn’t feel the captains vote is an issue for Matthews.

“Clay Matthews is a leader,” McCarthy said.  “We have more than six leaders on our team.”