You are here: Home / Badgers / McEvoy back at safety with the Badgers 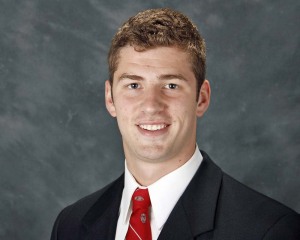 Tanner McEvoy played some safety last season for the Wisconsin Badgers.  It would appear defensive coordinator Dave Aranda liked his work because McEvoy is back at safety as the Badgers are preparing for the New Years Day Outback Bowl against the Auburn Tigers in Tampa, Florida.

McEvoy is getting work this week in practice on both sides of the ball, at QB and at safety.  He’s played all eleven games at quarterback this season.  Last season, McEvoy intercepted one pass, broke up three others and finished with 27 tackles.  He said Thursday that he believes he can help defend Auburn.

McEvoy is still working at quarterback and wants to continue to play the position.  But he said that decision for next season will come in discussions with new coach Paul Christ after the bowl season.