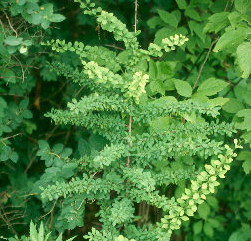 The state Natural Resources Board has signed-off on proposed changes to Wisconsin’s invasive species rule.

Of the plants being added, Watermolen says they all have a potential to cause ecological harm or present a threat to human health. For example, he says the introduction of a shrub that leafs out earlier in the season could bring extra shade to a wooded area that keeps native flowers from growing, altering the ecology of that area.

The rule change also downgraded the emerald ash borer from prohibited to restricted status, now that the tree-killing beetle has turned up in 19 counties. The move is an admission by the DNR that the insect has become too pervasive to eradicate from the state completely, but officials indicate efforts are still being made to keep it from spreading to more areas.