You are here: Home / News / Official Capitol Christmas tree is displayed in the rotunda 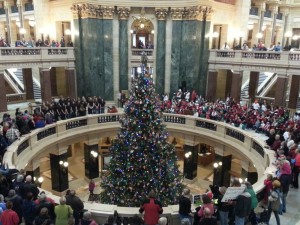 A 40-year-old balsam fir from Rhinelander takes center stage in the rotunda of Wisconsin’s statehouse, standing approximately 30 feet tall, according to Capitol groundskeeper Steve Green. The conifer was dragged into the building on Monday and then erected, stabilized, filled out, and decorated during the week.

“Bring it in on Monday; let it rest so the branches fall down. Then we start Tuesday morning. Depending on the tree and the size, we’re done by Wednesday or Thursday.”

The state Capitol has displayed much taller trees in the past, but Green explains, it’s not safe to decorate. He says, as the tree gets more narrow toward the top, it becomes more difficult to reach from the towering scaffolding.

“As you’re standing on a scaffolding that goes straight up, the distance between you and the top of the tree is greater. So it’s very hard to decorate the first … anything over 35 feet … it’s very difficult to reach those branches, and that takes a lot of time.”

The holiday tree will be illuminated with approximately 4,500 energy-saving LEDs; a train encircles the base; and ornaments made by school children decorate the branches.

Green says every year people love to gaze at the fully-decorated tree, but it’s also a special treat for passersby to watch it being put together and decorated. “People take pictures. Today everybody seems to have a camera.” He says local folks visit the Capitol building, as do people from across the state and the country.

The balsam fir is a popular holiday tree because of its ability to stay fresh for a longer period of time.

Putting up the official Capitol Christmas tree is an interesting process.

It starts really early in the morning with the removal of some doors from their hinges on the Capitol building and a crew of helpers. Retired workers often come back to be part of the holiday tradition.

“We basically … when the tree gets delivered, we put it on the perch with a crane, and then carpenters take the doors off, we set up a plywood chute, tie a rope on it, and then 40 or 50 guys pull it in here.”

Green says this year’s balsam fir stands approximately 30 feet. Now that it’s in the building, somebody’s got to stand it up.

“It takes a crew to get it lined up, we put the base on, and then we set up a winch up on the first floor. Mechanics winch it up, get it upright, bring the winch back down, attach it to a column on the floor, and pull the tree to the center of the rotunda.”

Green says the tree sits for a day to let the branches relax into place and it is given lots of water — 20 gallons on the first day it was up. Carpenters fill the gaps in the tree with spare parts to get a fuller fir. When they trim the bottom of the tree, the extra branches are saved. Carpenters will drill holes in the empty spaces of the tree, insert branches, and wire them secure.

Green says after New Year’s Day they’ll take down the tree and compost it.

The balsam fir was provided by Dennis and Kim Schoeneck of Schoeneck Tree Farm near Rhinelander.

The official tree-lighting ceremony is scheduled to take place at noon on Friday. The Christmas tree usually is taken down the day after New Year’s Day, but since that falls on a Friday, they’ll leave the tree standing for that weekend before taking it down on Monday, January 5th.