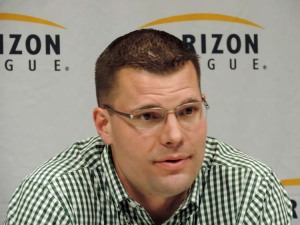 The Green Bay Phoenix (8-2) jumped out to a 12-0 lead on Wednesday night and cruised to a 66-50 win over Morehead State at the Resch Center.

Senior guard Keifer Sykes scored a game-high 17 points and Carrington Love added 12 points and five assists in the win.  Love went 5 for 7 from the field, reaching double figures for the third straight game.

The Phoenix held Morehead State to just 33% shooting from the floor, winning for the third straight game.

Brian Wardle’s Phoenix attempted 24 free throws in the first half and led 36-27 at halftime.  The opened the second half with an 11-4 run and Morehead state would get no closer than 13 points the rest of the night.