You are here: Home / News / Snowmobile trails in Vilas County to open Friday 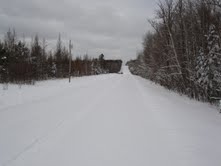 Vilas County Recreation Administrator Dale Mayo says they’ll be opening the trails tomorrow at 4 pm despite some warmer weather coming this weekend. “It doesn’t sound like we’re going to lose all our snow up here. We’d certainly not rather have the 40 degrees, but it is what it is. We’ll probably lose some of our snow, but we’re certain we’re not going to lose all of it.”

Conditions are typical for early season, though Mayo says some areas may be wet or rough. “Earlier in the season we had the freezing and thawing and hunters in the woods – and the trails are rutted. We did have plenty of snow, but we still have a few areas where you could encounter some rough spots. So we’re just encouraging everybody to use caution.” He says snowmobilers should avoid crossing lakes unless there’s a clearly marked trail.

Meanwhile state-funded trails in Oneida County aren’t frozen enough to open. County officials say opening day will depend on weather conditions, but it won’t be any time this weekend.