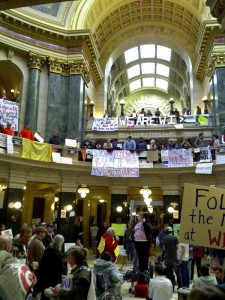 The head of a major state union group says his members are preparing for an expected debate over making Wisconsin a right-to-work state.

Discussions about a bill took off last week, after a group with conservative ties announced its formation and a state lawmaker said he was working on legislation. Then, Senate Republican Leader Scott Fitzgerald (R-Juneau) said the debate was unavoidable and his chamber would likely take up a proposal early on in the session. Governor Scott Walker has so far said the issue is not a priority.

Right-to-work laws prohibit employers from entering into labor contracts that require union membership as a condition of employment. Supporters say passing a law in Wisconsin would give workers more choice in the workplace and claim studies show states have added jobs after instituting a right-to-work policy. Wisconsin State AFL-CIO president Phil Neuenfeldt argues those laws have actually hurt labor markets in other states, which he contends have seen wages drop and workplace safety decline because workers have less power.

While it remains unclear exactly how the bill would address the issue, Neuenfeldt says they are not going to “sit and wait” for it to drop. He says the AFL-CIO has been actively working with its affiliates and other like-minded groups. “We are trying to do everything we can to try to encourage people to not support this. We are doing everything we can to educate people about why this is bad.”

Talk of introducing a bill has also prompted concerns about another wave of massive union protests at the state Capitol, similar to when Governor Scott Walker introduced legislation in 2011 that stripped the collective bargaining powers away from most public employee unions. A month of protests brought tens-of-thousands of people to downtown Madison and included a lengthy occupation by demonstrators.

While Neuenfeldt says it’s too early to say what kind of response a right-to-work bill would generate, he expects the public will more than willing to weigh-in. “It’s still a Democracy, and that means a bill has to have a public hearing and the public has to have a right to make their voices heard.”