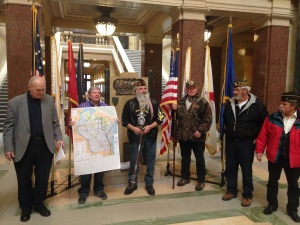 Veterans presented a list of grievances at the Capitol on Thursday. The group presented a wide-ranging list of complaints, but their main beef seems to be with the Eau Claire Schools which, according to former state Senator Dave Zien, is the only district in the nation to have prohibited the use of ceremonial weapons by military color guards. “Don’t say the word g-u-n-s,” said Zien. “They’re shooting blanks, there’s a plug in the end of the barrel,” said state Representative-elect James “Jimmy Boy” Edming.

The Eau Claire district did prohibit the use of ceremonial weapons on Veterans Day last month, which led a veterans group their to hold ceremonies at an off-campus location. The veterans at the Capitol also want, assurances that students at Wisconsin public schools are being made to recite the Pledge of Allegiance every day, along with new veteran-related designations for several state highways, and constriction of a fourth state veterans home.