You are here: Home / Badgers / Volleyball Badgers advance to Sweet 16 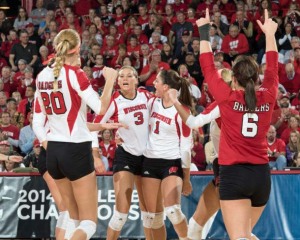 Badgers Rock the UW Fieldhouse / PHOTO: U of Wisconsin / UWBadgers.com

The fourth-seeded Wisconsin women’s volleyball team cruised to a 25-17, 25-19, 25-19 win over Illinois State in the second round of the NCAA tournament Friday night at the UW-Field House.

The Badgers handed the Redbirds their only straight-set loss of the season and ended Illinois State’s school-record 23-match winning streak.

This marks the Badgers second NCAA Sweet 16 appearance in two seasons under Coach Kelly Sheffield and the 12th appearance in program history.  The sweep over Illinois State was Wisconsin’s 22nd sweep of the season.

The Big Ten Champions have an NCAA Championship on their mind.  Last season, Wisconsin advanced to the championship match, falling to Penn State.