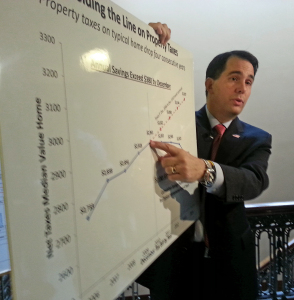 Walker says the typical homeowner will pay $141 less for property taxes than they did in 2010. Also, he explains, if the previous trend had continued, that same homeowner would be paying $385 more for their annual bill. The governor says cumulative savings exceed $800 for a typical homeowner over four years.

Walker says the state is working hand-in-hand with local and county governments. “Because for working families, for senior citizens, for small business owners, and farmers in this state, property taxes are overwhelmingly one of the biggest burdens they have in their own lives and their own businesses to deal with. We want to make sure we continue to provide property tax relief over the next four years.”

Walker stresses his progress as he prepares to put together the next two-year state budget.