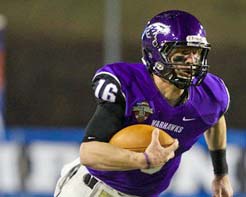 UW-Whitewater has done it again.  The Warhawks captured the NCAA Division 3 football championship, knocking off rival Mount Union 43-34 at the Stagg Bowl in Salem, Virginia.

The two schools have met in nine of the last ten Stagg Bowl Championships.  Whitewater captured its sixth title, including the last five.

It was a parting gift for coach Lance Leipold, who leaves Whitewater to take over the coaching reigns at Division-1 Buffalo.  He leaves the state with a 34-1 record in post-season play and an overall record at Whitewater of 109-6.

The two teams combined for 1,068 yards, including 688 through the air.  Behrendt passed for 365 yards and claimed the Stagg Bowl Most Outstanding Player honor for the second straight season.

Mount Union quarterback Kevin Burke threw for three scores but was picked off four times by the Whitewater defense.  Burke is the two-time defending player-of-the-year, but he is 0 for 2 in National Title games.