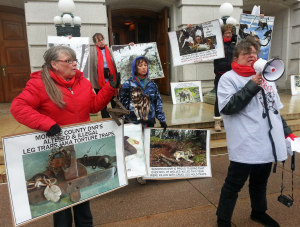 Wisconsin’s annual wolf hunt is done, but that’s not stopping opponents of the season from trying to keep another one from taking place.

About a dozen protesters associated with the national Wolf and Wildlife Action Group rallied at the Capitol Monday, arguing that the state’s season violates the United Nations nature charter and should be stopped. Grace Blackbear of Sparta said the use of traps and dogs to kill wolves is cruel and inhumane, and claimed the animals are often “left in the traps for days” or dogs are used to take them down. “They are injured, they are in pain, they are screaming.”

The state started the annual wolf hunt three years ago, after the gray wolf was removed from the federal endangered species list. Advocates contend the season is needed to manage the wolf population and prevent attacks on livestock, but Blackbear argues wolf attacks on domestic animals are rare and don’t justify the hunt.

Protesters also claimed Wisconsin’s wolf season is mismanaged, after hunters have exceeded the quota set for each of the past three seasons. While the DNR has divided up the hunt into multiple zones, Blackbear says hunters often go after entire packs and wipe them out. “This is not a viable kill, this is not the way to manage any type of population whatsoever,” Blackbear argued.

The state’s most recent wolf hunting season ended on Friday, with hunters exceeding the quota for the year by four animals. The state Department of Natural Resources declined to comment on the protest.