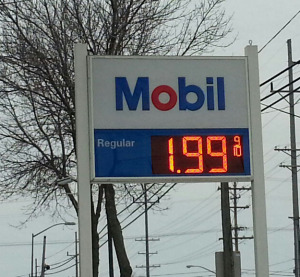 For the first time in almost six years, the average gas price in Wisconsin has fallen below the $2 mark.

According to the AAA Fuel Gauge Report, the current statewide average for a gallon of regular unleaded fuel is $1.99. That price is down 55 cents in the past month and $1.27 from the same date a year ago.

AAA-Wisconsin’s Nick Jarmusz says the drop is due to falling crude oil prices, abundant supplies, and low demand. Since mid-2014, he says “the price for crude oil on the world market has dropped almost in half, and that’s being driven really be over-supply on the market.”

As for how long it will last, Jarmusz says that’s hard to predict. “Typically, when we see this kind of a fall in prices, the oil-producing nations, particularly OPEC, will get together and put kind of a floor on the market by cutting back some production. They’ve indicated that they are not planning to do so, at least not any time soon.”

The last time statewide gas prices were below $2 a gallon was March of 2009.