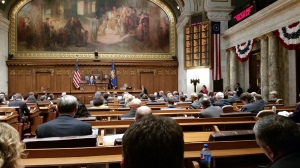 State Senate minority leader Jennifer Shilling (D-La Crosse) criticizes Governor Scott Walker’s fifth State of the State Address, saying it’s important to focus on the issues facing Wisconsin families, and not get distracted with Washington politics. “I think what really struck me most about Governor Walker’s speech tonight was really the lack of details on how the Republicans will fix the $2.2 billion deficit that they have created.”

State Assembly minority leader Peter Barca (D-Kenosha) was also critical of the governor’s brief speech — about 25 minutes in length– and its lack of substance. “I think we all were pleased that the governor ended with standing up for freedom and against terrorism, but the governor was less than candid about the state of our state at this time and how far we’ve fallen behind on so many key economic indicators.”

Barca blames Republican policy failures for Wisconsin’s staggering budget deficit, lagging jobs and wage growth, and an underfunded educational system. Shilling, along with all those issues, wants more attention on rural areas. Republicans were pleased with the tone of the speech.

Meanwhile, in keeping with a Packers theme for the night, Shilling criticized the length of Walker’s address by joking the team has had longer offensive drives that Walker’s speech. Walker, in his comments, touted the Packers playoff win on Sunday and said the Green and Gold is one thing Democrats and Republicans can agree on.