You are here: Home / News / Dropkick Murphys to Governor Walker: ‘We literally hate you’ 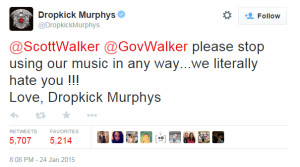 A Celtic punk band is asking Governor Scott Walker not to play their songs during political rallies.

As Governor Walker took the stage at the Iowa Freedom Summit in Des Moines over the weekend, the Dropkick Murphys song “I’m shipping up to Boston” played over the speakers. That prompted a response from the band, which wrote on Twitter “please stop using our music in any way…we literally hate you !!! Love, Dropkick Murphys.”

It’s not the first time Walker has attracted negative attention from a music artist. John Mellencamp also criticized the governor for using his music at events, although it has not stopped Walker from continuing to do so.

Walker’s campaign did not respond to a message seeking comment.