You are here: Home / News / Inauguration Day at the Wisconsin Capitol 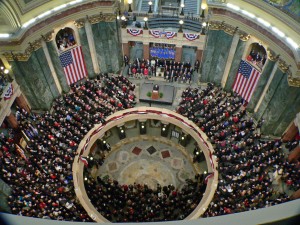 An air of celebration will surround Wisconsin’s Capitol building today, as new and returning members of the Legislature and state constitutional officers begin new terms.

The governor, attorney general, secretary of state, and treasurer will all be sworn in this morning during a ceremony in the rotunda. Members of the state Senate and Assembly will take their oath of office later this afternoon.

Republicans will start the new session with majorities in both chambers of the Legislature and their largest majority in the state Assembly in more than 50 years. They will also control three of the state’s four constitutional offices. Secretary of State Doug La Follette was the only Democrat to win a statewide office in November.

Governor Scott Walker and majority Republicans will face many challenges during the upcoming session. Those include addressing shortfalls in transportation funding, a projected structural deficit in the state budget of $2.2 billion, and strong pressures to provide more tax relief in the next biennium.