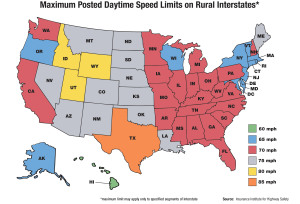 The bill from state Representative Paul Tittl (R-Manitowoc) and state Senator Devin LeMahieu (R-Oostburg) would allow traffic safety engineers at the Department of Transportation to increase speed limits on state highways to the 70 mph mark, if they feel it would be safe to do so. Tittl says those who deal with highway safety should be making that determination, instead of having lawmakers mandate where it should be changed.

Critics have raised concerns previously that a higher speed limit could make highways less safe. LeMahieu says that has not been the case in other states that have adopted the change, pointing to statistics that show highway traffic deaths declined in Iowa and Illinois after they increased speed limits.

Wisconsin is the only state in the Midwest to still have a maximum speed limit of 65 mph in place. Neighboring states have all gone to a 70 mph standard in recent years, and there are concerns the Badger State could get left behind if it doesn’t make the switch. Tittl says he would like to see the legislation acted on quickly this spring, so new speed limits could be in place in time for the summer tourism season.

A similar push last session failed to get out of the Senate’s Transportation Committee. LeMahieu and Tittl says there are new members on that panel and they are optimistic about its chances this session.