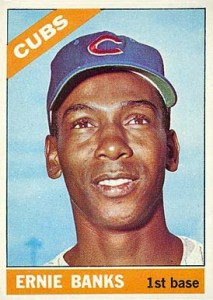 Mr. Cub passed away on Friday at the age of 83.

Renowned for his sunny disposition, Banks loved the game and even when the Cubs were struggling, would proclaim “Let’s play two!”.  Banks was awarded a Presidential Medal of Freedom during ceremonies at the White House in 2013, recognizing his goodwill.

Banks started his professional career in 1950 with the Kansas City Monarchs of the Negro Leagues.  He took two years off to serve in the military, then he joined the Cubs.

Banks finished his career with his beloved Cubs, playing all 19 of his seasons with the Northsiders.  Unfortunately for Banks, his career never took him to the postseason.  He’s considered one of the greatest players of all time not to make a playoff appearance.

Banks was involved in the city of Chicago and with Little Leagues all around the city and suburbs.  He was an ambassador for the city and for the game of baseball.

You don’t have to know a lot about baseball to have heard about Mr. Cub.  He lived a great life and his memory will last forever.