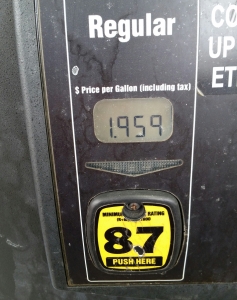 Wisconsin is experiencing the lowest gasoline prices in nearly six years, according to the auto club AAA. At $1.95 a gallon for regular unleaded gasoline, the statewide average has dipped below two bucks a gallon for the first time since March of 2009. One year ago at this time it was $3.26 a gallon.

UW-Madison economics instructor Richard Shaten points to market speculators for their role in fluctuating oil prices, creating what some call a “crude oil casino.” He says, “You know, I read someplace recently that for every barrel of oil that gets delivered, people buy and sell 30 barrels of oil on paper.” He adds, “Many of these trades are computer programmed. Billions of dollars changing hands over speculation on the price of oil.”

The cost of crude oil is less than $50 a barrel — about half of what it was just a few months ago. In June, the cost of crude was $110 per barrel. Both extremes, Shaten says, are exaggerated.

Meanwhile, we’re not necessarily hording the savings, according to Shaten. Most Americans have what he calls a “marginal propensity to consume.” He explains, “I’m not likely to see that money pile up in my bank account, but I’m likely to spend it on other things. In a sense this is good for our local economy.”

AUDIO: Shaten says money consumers save on fueling up their tanks will likely be spent elsewhere, boosting the economy. :39

As an example, Shaten says he’s saving $20 every time he fuels up, which he does once a week. That’s more than $1,000 a year, he says, that’s going back into the local economy. Shaten says consumers should consider it a “gift” that won’t last forever, “kind of like a rebate.”

Shaten says, considering the lower prices, some states and some economists argue for temporarily jacking up the gas tax to help generate revenue for the transportation fund. And then, he says, that gas tax could be lowered when the price of fuel increases. Though, he notes, that idea isn’t popular with everyone.