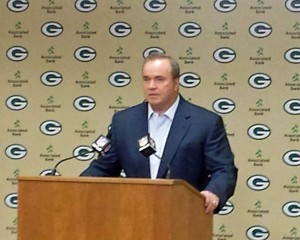 Some believe the Green Bay Packers NFC Championship game collapse and the hangover that goes with it, will be Mike McCarthy’s biggest challenge to overcome next season.

The Packers fell to the Seattle Seahawks 28-22 in overtime after dominating the game.  It was arguably the biggest collapse in franchise history.

Yet Packers coach Mike McCarthy said the Packers will turn this defeat into a positive.

“We’re going to create another opportunity to build the best football team that we can in 2015, and we’re going to go for it,” McCarthy said.

For McCarthy, this is the time for evaluation.  All coaches have the week off, but they’ll conduct studies on their own.  McCarthy will then conduct exit interviews with the coordinators and then the assistants next week.  The process is expected to take about a week.

The Packers will have decisions to make on their own free agents, especially Randall Cobb, Bryan Bulaga, Tramon Williams and Davon House.  But with the NFL scouting combine fast approaching, the focus is on the draft.

McCarthy said it was nice to add a couple of free agents last season (Julius Peppers & Letroy Guion) but that doesn’t mean it’s always the way things are going to be.