You are here: Home / Packers / McCarthy’s successful challenge is his first this season (Audio) 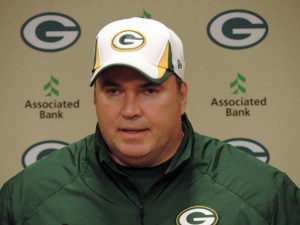 Green Bay Packers quarterback Aaron Rodgers was confident that Dez Bryant’s reception in the fourth quarter would be overturned, and he was right.

Mike McCarthy said he got a good look at the play on the Lambeau Field Jumbotron and threw his second challenge flag of the day.  This one proved to be the one for McCarthy, who won his first challenge of the season.

After the review, it was announced that Dez Bryant did not maintain possession of the ball.  It also meant instead of the Cowboys having possession of the ball at the 1-yard line with a chance to take the lead, the ball went over to the Packers, who ran out the final four minutes to pull out their 9th win at Lambeau Field this season.  Final score:  Green Bay 26, Dallas 21.

As it turns out, McCarthy was one of only two NFL head coaches to not have won a challenge this season, with the other being former Atlanta head coach Mike Smith.

The decision wasn’t well received by the Dallas Cowboys.

McCarthy had already lost his first challenge of the day.  McCarthy was trying to get a pass interference penalty overturned by saying linebacker Julius Peppers deflected Tony Romo’s pass, which would have negated the penalty.  The Packers lost that challenge.  But McCarthy said with the circumstances involved in this play, the decision to challenge was a no-brainer.

The Cowboys felt the disappointment of the reversal, but quarterback Tony Romo said the main thing for him is realizing that the season is finished for he and his teammates.

AUDIO: Tony Romo on their season being over :17

The Packers move on to face the Seattle Seahawks in the NFC Championship game at 2:05pm Sunday.