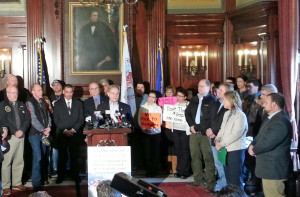 Members of the Menominee Tribe are joined by other Kenosha casino supporters (Photo: Andrew Beckett)

An official with the Menominee Indian Tribe says they are still considering their next move, following Governor Walker’s decision to reject their Kenosha casino proposal.

The tribe is joining with southeastern Wisconsin lawmakers in calling on the governor to reconsider the decision, which they argue there’s still time to do before a February 19th Bureau of Indian Affairs deadline. If he does not, Menominee Tribe Vice Chair Crystal Chapman-Chevalier says they are continuing to “look at any legal options we have available to us.”

Following a press conference at the Capitol Thursday, Chapman-Chevalier would not say if that could include a lawsuit or even submitting a new casino proposal. She said the tribe continues to work with their partners at Hard Rock International to evaluate the future of the over $800 million development and are “hoping that this will come to a positive resolution.”

The governor has insisted that his decision became final when he notified the Bureau of Indian Affairs last week that he was rejecting the proposal. Chapman-Chevalier argued that the federal government has the final word though, and they want Walker to take some extra time to reconsider.