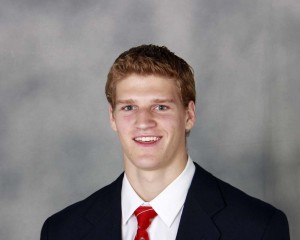 For the second time in as many Fridays, the Wisconsin Badgers grabbed a first-period lead, leading 3-1 in their series opener against the rival Minnesota Gophers.  Unfortunately for the Badgers, they’re now 0-2 in those games.

Last weekend, Michigan came from behind and last night, so did the Gophers.  Minnesota scored four straight goals and went on to beat the Badgers 7-5 at the Kohl Center.

Freshman Matt Ustaski posted his first multi-point game with a goal and two assists.  Minnesota natives Joseph LaBate and Grant Besse each had a goal and an assist for Wisconsin.

The series resumes Saturday at 7pm at the Kohl Center with the game televised by the Big Ten Network.

The 1990 NCAA championship team will be recognized during the first intermission on Saturday.

The 3rd-ranked Wisconsin women’s hockey team earned a 3-0 triumph against Minnesota State on Friday at the All Seasons Arena.

A pair of Badger freshmen did all the scoring for the Badgers.  Emily Clark tallied two goals and Annie Pankowski lit the lamp in the third to put the game out of reach.

Wisconsin (20-4-3, 15-4-2-0 WCHA) goaltender Ann-Renee Desbiens earned her ninth shutout of the season, stopping all 13 shots she faced to improve to 17-4-3 this season.  Her nine shutouts are tied for the fourth-most in program history.