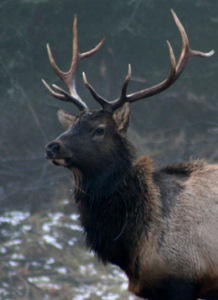 Wisconsin could soon have almost twice as many elk roaming parts of the state.

The state Department of Natural Resources has reached an agreement with Kentucky wildlife officials and a number of stakeholder groups to capture and transport about 150 elk from the southern state to Wisconsin. DNR big game ecologist Kevin Wallenfang says it’s a big opportunity that will ultimately bring those animals to Wisconsin to help augment an existing population near Clam Lake and start a new herd in Jackson County.

Efforts to re-introduce elk in Wisconsin started in 1995, with 25 animals donated by Michigan. The herd, located in Ashland County, has grown to about 160 animals in the past 20 years. Wallenfang says that growth has never really kept up with expectations, adding “this is an opportunity for us to kind of jump-start that population, to help make it flourish as it was always intended to.”

The elk from Kentucky are being donated, but the state has budgeted about $550,000 to help bring them to Wisconsin. Private stakeholders have also agreed to contribute resources and fundraise for the effort.