You are here: Home / Packers / Packers are ready to go with Rodgers 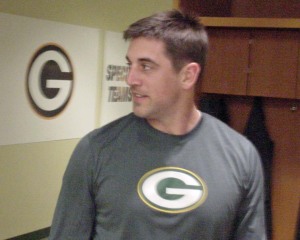 Friday is a non-practice day in Green Bay, but Packers head coach Mike McCarthy still felt comfortable enough about what he saw from Aaron Rodgers on Thursday that he declared Rodgers ready to go for Sunday’s Division playoff game against the Dallas Cowboys at Lambeau Field.

Even though the Packers didn’t practice on Friday, they were still required to issue an injury report based on an estimation.  Rodgers, who has been rehabbing his injured left calf, was listed as probable on the injury report.

AUDIO: QB’s coach Alex Van Pelt says they do what they can for Rodgers :14