You are here: Home / Packers / Packers vs. Cowboys provide for a great matchup (Video) 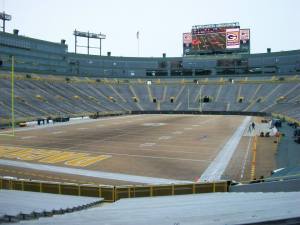 It’s being billed by some as “Ice Bowl II”, but Sunday’s NFC Divisional Playoff game between the Green Bay Packers and Dallas Cowboys at Lambeau Field will be far from the conditions on display in the 1967 NFL Championship game.

Forecasters are calling for temperatures to reach a high of about 15-degrees on Sunday.  On that championship day in Green Bay, Dec. 31, 1967, the temperature hit -13 at kickoff and the wind chill reached 48-degrees below zero.  The air temperature alone will be about 28-degrees warmer this time around.

The matchups on the field appear to be good ones, but the one wildcard is the temperature.  How will a team from the south handle Sunday’s temperatures and the accompanying wind chill factor?

The coldest temps the Cowboys have played in to this point in the season came during a game in Chicago.  The thermometer read 34-degrees and the Cowboys had no problem handling the weather or the Bears.

Sunday’s matchup is also about the Packers, who are a perfect 8-0 at Lambeau Field this season, facing a Cowboys team that is 8-0 on the road.  Dallas comes to Green Bay having won 9-straight road games.

The game also features two of the games hottest running backs.  Dallas running back DeMarco Murray is the NFL’s leading rusher and Green Bay’s Eddie Lacy is the seventh leading rusher.  The Packers defense has been much improved against the run this season, making big strides since the bye week.  But the Cowboys ground attack will give Dom Capers defense there stiffest challenge of the season.

If Dallas can run the ball against the Packers, then Cowboys quarterback Tony Romo will have a much better chance to be effective in play action.  If the Packers can shut down the Dallas running game, Romo’s job will have just become much more difficult.

One of the wildcards in this chess match is Packers Pro Bowl quarterback Aaron Rodgers.  He didn’t practice on the weekend and Mike McCarthy said Monday that his status, as well as practice plan for the week will be determined after meeting with team doctors on Wednesday morning.

Rodgers has injured his calf twice in the last two games and won’t be 100% for this game.  But in each case, he has played on and while confined to the pocket, has produced some impressive numbers.  How will the cold weather effect Rodgers left calf and can he get through the game without injuring the calf again?

The Packers have had issues with their special teams protection for some time now.  They’ve had seven blocked kicks/punts and the protection issues have yet to be resolved.  Mike McCarthy said he’s confident those problems in time for this Sunday’s game.

Sunday’s matchup will be the first Packers-Cowboys playoff game in Green Bay since that historic NFL Championship Game in 1967.  Since then, the Packers have lost three straight playoff games to the Cowboys, all in Dallas from 1993 to 1995.

The Packers  have seen their last three seasons end in playoff disappointment with losses to the Giants and the 49ers twice.  Mike McCarthy said those losses won’t be used as a motivator, but how could they not be?  Many of the players on this team have felt some of that playoff rejection and will be trying to avoid a repeat.