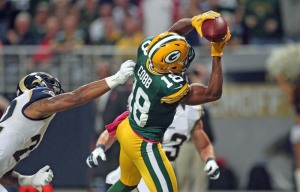 The NFL scrapped its NFC vs. AFC format and went to the current system a year ago.  The game is being played in Glendale, Arizona, which is the site of next weeks Super bowl.

Quarterback Aaron Rodgers pulled out of the game this weekend because of his calf injury.