You are here: Home / Legislature / Republican leaders pleased with tone of State of the State 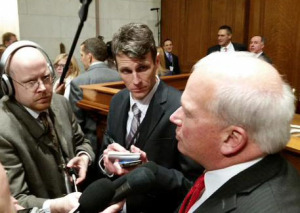 Sen. Scott Fitzgerald talks to media after the State of the State (Photo: Jackie Johnson)

While the governor offered few details in his State of the State address about the policy issues he wants the Legislature to pursue this session, Republican leaders believe he was just setting the stage for the budget address he will deliver next month.

Assembly Speaker Robin Vos (R-Rochester) says the governor used his speech to talk about the good things happening in the state, noting that “there’s a lot to be proud of, not just the Packers.” Still, Vos said most of the details and top priorities are likely coming in the budget address Walker will deliver next month.

Senate Majority Leader Scott Fitzgerald (R-Juneau) had a similar impression of Tuesday night’s speech. “There’s a lot of stuff that I’m waiting to see…related to his budget address. I think that’s typically where we kind of see the priorities of the governor,” Fitzgerald said

Both Vos and Fitzgerald said a school accountability bill remains their top priority, and they were glad to hear Walker show support for passing that legislation. The governor also called for lawmakers to pass a bill that makes it “crystal clear” that Common Core education standards are not a requirement in Wisconsin, although Fitzgerald noted that the decision on whether to adopt those standards for math and language arts is already left up to local school districts. The Juneau Republican said that’s “part of the frustration” among many of the people who are pushing for the repeal of Common Core.

The governor also called on lawmakers to merge the Wisconsin Economic Development Corporation and the state’s Housing and Economic Development Authority, and combine agencies that oversee state licensing of professionals. Speaker Vos said doing that outside of the budget makes sense, so any cost savings can be realized right away. Fitzgerald said that the proposal is not expected to reap huge savings for the state, but it would help meet the governor’s goal of improving state government efficiency.