You are here: Home / Business / Right-to-work not dead in Wisconsin 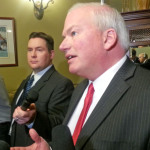 The controversial right-to-work legislation might not be on a fast track in Wisconsin, but it’s also not a dead issue. That’s according to state Senate majority leader Scott Fitzgerald (R-Juneau). “It’s still out there. I think it’s still something that deserves debate. The votes are probably there in the Assembly, which is odd that there’s so much focus on the Senate I guess, but that’s fine. I’m not counting noses, I’ve said all along. I’m still talking to members about how they feel about the issue.”

Fitzgerald says he understands that Governor Scott Walker is concerned about the Capitol becoming full of chaos and sending a message to people outside the state that once again we have an unstable state government in Wisconsin.”

It’s “premature” to say a right-to-work bill for Wisconsin isn’t going anywhere in the legislature, according to Fitzgerald, who says, “We’ll continue to talk about the issue.”

The earliest the bill would come up in the Senate, he says, would be after the April election to fill a vacant Senate seat. Under right-to-work, employees of private companies are not required to join unions or pay union dues.