You are here: Home / Packers / Sitton struggles with loss in Seattle (Audio) 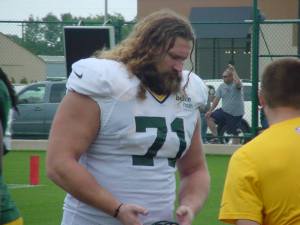 Josh Sitton may feel different a week from now, but it’s clear the Green Bay Packers Pro Bowl offensive lineman is having a hard time dealing with Sunday’s 28-22 overtime loss to the Seahawks.

Sitton said he tried to watch the game on the plane ride home but turned it off.

“I couldn’t watch it,” Sitton said.  “I knew what happened.  We kicked their (expletive) up front, and the whole game.  We handled them all day.  We should’ve won the game.”

AUDIO: Josh Sitton says it’s tough getting past this loss :16

The feeling was much the same from player-to-player.  Randall Cobb said he felt blindsided after the late game collapse led to a Packers defeat.

AUDIO: Randall Cobb said he had a hard time sleeping on Sunday night :14

The Packers had their chances but couldn’t pick up a first down on a pair of late drives that would have salted the clock away.  The Packers did manage to move the ball after falling behind, getting into position for Mason Crosby to tie the game with a 48-yard field goal.  But the Packers defense couldn’t stop the Seahawks in the overtime and the Packers never got a chance to pull out a victory in overtime.

“I’d rather not even make the playoffs.  I’d rather have gotten blown out and known in the first quarter it was over,” Sitton said.