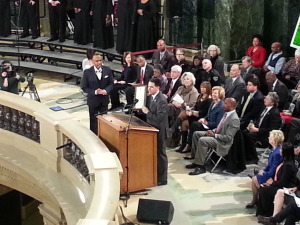 The 35th annual official state tribute and ceremony recognizing the slain civil rights leader draws a big crowd in the Capitol rotunda. Dr. Jonathan Overby helps honor Martin Luther King. “Though we as a nation have progressed, sadly we’re still marching. Marching for those who remain marginalized. Still marching on behalf of our country’s poor and disenfranchised.”

King worked to advance civil rights by encouraging nonviolent civil disobedience. The Baptist minister was assassinated in 1968 while planning a national occupation of Washington, DC.

AUDIO: Jadon Colbert, a 4th grader at St. James Catholic school in Madison, recited a portion of King’s “I have a dream speech,” giving him a round of applause for the line “free at last, free at last. Thank God almighty, free at last.” 6:00

AUDIO: CNN political commentator Van Jones keynotes the event. He founded and led four not-for-profit organizations engaged in social and environmental justice. He says kids need to be taught the skills they need to create their own future. 1:28

King would have been 86 years of age on January 15th. He was killed when he was just 39.