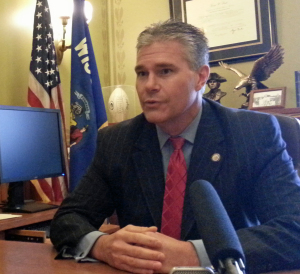 Wisconsin’s outgoing attorney general maintains that defending the state’s gay marriage ban was the right thing to do.

When a federal court challenge was filed last February, Attorney General J.B. Van Hollen vowed to vigorously defend the ban. Even though the constitutional amendment was eventually struck down and some accused of him being on the wrong side of history, he says it was his job to stand by the measure. “I have no qualms about the job that I did, why I did it…regardless of how I may be viewed in history, I did the right thing, because the constitution needs to be defended by the attorney general,” Van Hollen said in an interview with WRN.

Van Hollen argues that any attorney general who would not have defended the state constitution should just quit, since they would not be doing their job.

Had he not defended the ban, Van Hollen says the state likely would have spent millions of taxpayer dollars hiring outside attorneys to do the work. It also could have thrown the issue into a legal limbo other states faced with challenges to their bans, such as questions in California over whether some parties had standing to sue.

Van Hollen also notes that letting the issue work its way through the courts provided some finality to the debate, which proponents of gay marriage should be happy about.

Attorneys with the American Civil Liberties Union have asked a federal judge to award them nearly $1.25 million to cover expenses related to the legal battle. While he can’t comment on the ongoing negotiations, Van Hollen says that’s completely expected under the law. He also notes that Wisconsin has collected far more in legal fees from cases it’s won than it has paid out in cases that have been lost during his time as attorney general.