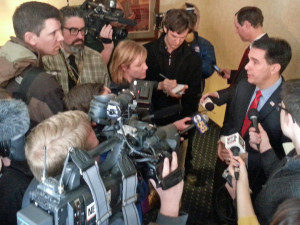 Wisconsin Governor Scott Walker won’t be reconsidering his rejection of a proposed Hard Rock Kenosha casino. That’s despite a request from a bipartisan group of ten lawmakers from southeastern Wisconsin, asking the governor to do just that.

“I had a hundred million reasons I had to say no,” Walker told reporters in Madison on Wednesday. “That would cost us, if I had approved the casino . . . about $100 million right now, and potentially two to three to four times that in the future.”

The lawmakers contend that Walker could rescind his rejection prior to the February 19th deadline by which the federal Bureau of Indian Affairs expected a decision. Walker doesn’t believe that’s possible. “My understanding is, and we’ll again verify that, is it’s like signing a bill. You don’t get to go back and un-sign a bill. Once you’ve notified the Bureau of Indian Affairs if your decision, that’s it.”