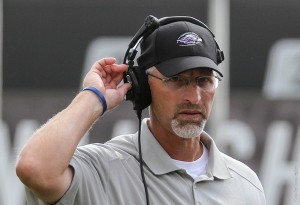 Bullis served as a defensive assistant for the defending national champion Warhawks for seven seasons and has been interim coach during the school’s coaching search.

In a news release from the schools athletic director Amy Edmonds, she said, “We are thrilled to promote Kevin to the position of head football coach at UW-Whitewater.  His passion, integrity and understanding of the holistic student-athlete experience stood out during the search and screen process.

“Kevin understands the rich history of Warhawk football and the entire university, and we are confident in his ability to continue our tradition of excellence both on and off the field.”

Bullis becomes the 21st head coach in the 121-year history of Whitewater football.  The Warhawks won the NCAA Division III championship in December for the sixth time in eight seasons.  Bullis was on the Whitewater staff for five of those titles.

The Warhawks have finished among the nation’s top 20 in rushing defense and scoring defense the last six years.