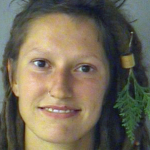 A Wisconsin woman convicted of causing damage during a 2013 protest at the site of the proposed Gogebic Taconite iron ore mine in the Penokee Hills has been sentenced to nine months in jail. Katie Kloth of Weston was leader of a group that threw cans and water bottles at workers and damaged equipment.

Kloth became enraged with a worker videotaping their activities, and she and an accomplice took away the video camera and the camera operator’s cellphone. The protesters harassed workers for about an hour and fled the scene just before sheriff’s deputies arrived at the site.

Normally, a first time offender might get off with only probation. Judge Douglas Fox ordered the jail time and five years of probation after telling Kloth, “You’re a zealot and feel strongly about mining, but this had nothing to do with mining. This was an assault on people.” Fox also ordered Kloth to pay $2,400 dollars in restitution.