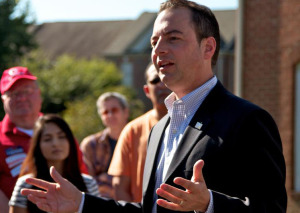 Wisconsin will host a national debate ten months from now, featuring the Republicans who are running for president at the time.

The Republican National Committee announced locations and general time frames Friday for nine sanctioned GOP debates for the 2016 presidential contest. The Wisconsin event will be held in November, but the date and location have not yet been announced yet.

Kenosha native Reince Priebus, who chairs the Republican National Committee, says the party is not committed to having what he calls a “circus” that surrounded the 22 GOP debates held during the 2012 election cycle. Critics said it was too many.

The nine scheduled debates will be sponsored by TV networks.

Meanwhile, Priebus, was re-elected Friday to his third two-year term as the RNC chairman. He’s been credited with party’s improved fundraising, and a victories 2010 election cycle. The former Republican Party of Wisconsin director said his most important challenge to get Republicans to win back the White House in 2016.