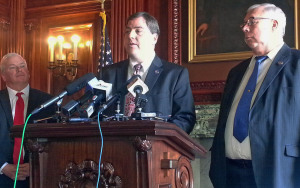 Senate Republicans are taking a different approach to school accountability legislation, setting up a possible showdown with Assembly Republicans early on in the new Legislative session.

State Senators Paul Farrow (R-Pewaukee) and Luther Olsen (R-Ripon) introduced their version of a bill Tuesday that’s aimed at providing a system for grading schools that receive taxpayer funding, which would then work to improve those that fail to meet expectations. Farrow says the goal is to “put together an accountability piece that show the parents what their schools are doing, and holds them accountable for their kids to make sure they are getting the proper education they are looking for.”

The Assembly bill has a single board overseeing public, charter, and vouchers schools, and requires failing public schools to convert to independent charters after four years. The Senate version has a board for public and charter schools, along with one for private voucher schools. It also allows school boards to maintain control of failing public schools, rather than requiring them to convert to a charter school.

Farrow says the different approaches are partially the result of legal concerns, due to constitutional requirements that grant the Department of Public Instruction oversight on schools. Farrow says he believes “there are portions of AB1 that would be challenged in court.”

Hammering out the differences could be a difficult process. A push to pass a school accountability bill last session fell apart after Republicans failed to find common ground between the two chambers. Assembly Speaker Robin Vos (R-Rochester) said a conference committee may be needed to resolve the differences. Senate Republican Leader Scott Fitzgerald (R-Juneau) rejected that idea, saying “with Republicans having control of both chambers, I think that would be kind of foolish.”

The Assembly’s proposal is scheduled for a committee hearing Wednesday at the Capitol.