You are here: Home / Crime / Courts / Arrest made in Dane County arson 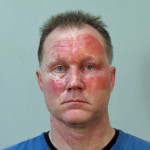 A Dane County man is under arrest, in connection with an arson fire at a residence that was set to house a sex offender. Dane County Sheriff David Mahoney said Tuesday that 50-year-old Russell A. Speigle of Cottage Grove had become a person of interest early in the investigation of an earlier fire at the same location.

The first fire occurred on December 8th, 2014 causing approximately $90,000 in damages to the unoccupied home at 4721 Gaston Circle. Fire investigators ruled it as arson. Repairs were being completed at the time of a second fire on Sunday, February 22nd. Again, investigators believed the fire had been set intentionally, this time resulting in the total loss of the home.

After the second fire, detectives visited Speigle’s residence to speak with him. Detectives then learned that Speigle had left town shortly after that.

Search warrants were obtained on Monday, February 23rd, and detectives located Speigle that same night at a residence in Muscoda. He was transported the Burn Unit at UW Hospital in Madison, where doctors determined he should be admitted for additional treatment. Speigle was released from the hospital Tuesday afternoon and booked into the Dane County Jail on charges of arson.

The Gaston Circle residence was set to house 40-year-old Howard Nyberg, who was to be placed there as part of a supervised release program. Nyberg was convicted in 1994 of second-degree child sexual assault, and later committed as a sexually violent person to a secure treatment center in Mauston.