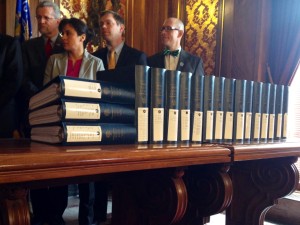 During a press conference at the Capitol, state Representative Joan Ballweg (R-Markesan) gestured at the 18 volumes of state administrative code, containing 1,768 chapters, and more than 11,000 pages. “Almost twice as much code as we have statutes,” Ballweg said.

“This process has been to review that code, because we don’t have any operationalized process to do that,” said Ballweg, noting that the effort had gotten through 20% of the code in its previous ‘Right the Rules’ incarnation during the last legislative session.

“Rather than starting out with a forgone conclusion that we want to start this or get rid of that, I think its much more educational for committee members and the public, to see if there are areas that do need change, that we can offer legislation to make it happen.”